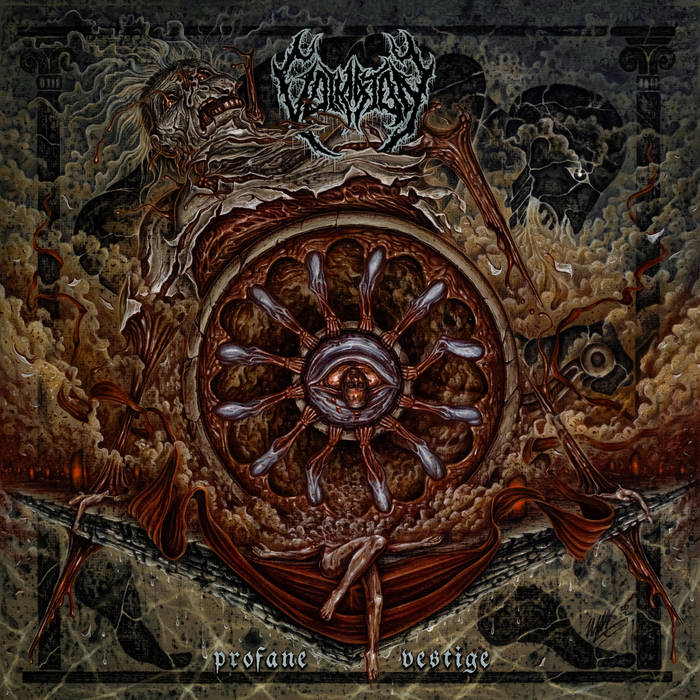 Michael Hojjatie Our pick for ALBUM OF THE WEEK at ViaOmega (www.viaomega.com and @viaomega on Instagram and on Facebook) for the week of 6/20/2022. Favorite track: Succumb.

bed666 hello, when will the vinyl be ready?

Dante Ruivo Death/doom pending more to the death side, I love it. The mix is my only gripe, I think the guitars are kinda buried, but overall, highly enjoyable for fans of the genre. Favorite track: Bile.

Deathlance I knew I would enjoy this, but lofty expectations have been surpassed. Swampy thick, fucking sick, balls heavy Death Metal.

Funeral Fog Fellow death-doom fans, get this one! These guys guys absolutely destroy!!

VOIMATON is a word of Finnish origin, which loosely translated means "powerless."
Fittingly, the band's lyrical themes center around the failings of humanity, nihilism, and feeling powerless in the face of nature’s cruel inflictions upon mankind. Even more fittingly, VOIMATON's brand of death-doom blends crushing traces of Cianide and Saint Vitus with the off-kilter weirdness of '90s Finnish death metal. It's a sick sound that's simultaneously familiar yet refreshing.

The conception of VOIMATON began immediately following the demise of local outfit Narcotic in 2016, whose lineup included Dave Tibbets (vocals, bass) and Pat O’Hara (drums). While VOIMATON had no official name at the time, and despite numerous false-starts throughout 2017 and 2018, Dave and Pat finally welcomed Henry Fordney (ex-Sable Beldam) into the fold in November 2018 to help bring VOIMATON into the physical realm, solidifying the trio. Wasting no time in digitally releasing a three-track demo in 2019, VOIMATON then released two more digital EPs the next year, Promo E.P. (Live Rehearsal - 01/25/2020) and LiveWire Lounge - Dec 14th, 2019, which were both later released physically by LIfe After Death Records.

Now, VOIMATON arrive with their full-length debut, Profane Vestige. A grand summation and culmination of all the prodigious promise shown by those short-length releases, Profane Vestige is everything a debut album should be: an encapsulation of the recent past plus the pursuit of new realms. To be sure, the hulking VOIMATON sound is alive and well here - caveman riffing given gnarly twists, clobbering breakdowns that break apart, a sweltering dampness of atmosphere - but it's the songwriting itself which shows the massive strides the band have made since their formation. True, much of the album comprises earlier tracks, but here they're given their fullest elucidation, twisting and turning with tension and unease, keeping the listener fully unsettled during the album's 40-minute duration but never forgetting to CRUSH them every step of the way. It's a classicist death metaller's dream record: well within their boundaries of pure 'n' proud tradition, but skewed just enough underneath (and above) to make it stand out.

Adorned with nightmarishly detailed cover artwork courtesy of the well-respected Noah Cutter Meihoff, VOIMATON's Profane Vestige sounds much the way it looks. What horrors await within?